Earlier this week, the Tahitian Mourner's costume went back on display in the Museum.  In this post, Chris Wilkinson and Alan Cooke, Display Technicians, explain the process of designing a case.


'The objective of the display was to give an ‘exploded’ view of the mourner’s costume. Restrictions, due to the case size, primarily its height, lead us to create a 1:10 scale maquette to fully understand how the objects would be positioned in the case. We then built a full size mock-up of the case.


To complete a final layout we first produced the mounts for each object and then arranged them within the mock-up case to determine their final positions. Individual temporary bases allowed us to do this. In the final case two permanent plinths took the place of these. The barkcloth mount is on a buckram torso and gave a central ‘body’ to the display around which the other artefacts were arranged.
The mounts were made using zf mdf (which does not contain formaldehyde) covered with an inert foam or calico covering to protect the artefacts and provide grip. These were then mounted upon poles as fixing to the sides or the back of the case would have meant too much visible structure due to the size and weight of the artefacts. The poles were colour matched to the case to minimize their visual interference.


Particular difficulties were the fragile nature of most of the artefacts, for instance the feathered cloak required full support and this was achieved by stitching to a padded calico covered panel. Also the breastplates and masks needed multiple wire fittings to support individual components of the whole artefact.
As the display had been created off site transferring the mock-up into the case in the museum was a relatively simple task.

The Friends of the Pitt Rivers go behind the scenes...

On the 18th January we hosted two groups of Friends of the Pitt Rivers in the Conservation Lab so that I could talk to them about my work on the Tahitian Mourner's costume.  Juliette Gammon, the editor of the Friends Newsletter, writes: 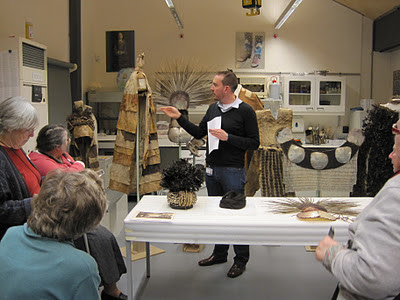 'Friends of the PRM went ‘Behind the Scenes’ of the Conservation Lab for a very special and privileged insight into Jeremy’s work on the Tahitian Mourner’s costume. Multi-layered and dyed barkcloth ponchos topped with an extraordinary cloak of bundled Tahitian pigeon feathers led one Friend to exclaim: “It must have been awfully hot to wear.”

We were fascinated by a ‘lost’ Forster collection object, a tamau or headdress made from a mile long rope of plaited human hair which was hidden under the feathered headdress, and learnt the spiritual significance of the plate-sized oyster shell breastplate and mask, the latter spiked with tropic bird feathers.

Among the many anecdotes from Cook’s two Tahitian voyages we heard how Joseph Banks, naturalist on the first voyage, entered into the spirit of things by donning a loincloth and blackening his body with charcoal. But, on that first trip, Cook came away empty-handed. On the second he was wiser, and stopped off in Tonga to gather objects containing red feathers - much prized for their symbolism in Tahiti. These were successfully traded for around ten mourner’s costumes.

Jeremy - many, many thanks from all of us for our own voyage of discovery. You can read more in the May issue of the Friends’ Newsletter.'

If you're interested in joing the Friends of the Pitt Rivers (FPRM) details can be found here:
http://www.prm.ox.ac.uk/friends.html
Posted by Jeremy Uden at 16:49

The Catalogue of Curiosities