Last week I went on a trip to Germany to see some Cook-voyage collections in museums there.  The first stop was Göttingen, in Lower Saxony.  The Institute of Ethnology of the University of Göttingen houses one of the oldest and most important ethnographic collections in the world.


The collection was begun in 1773 when the naturalist Johann Friedrich Blumenbach obtained a significant cabinet of natural history items for the University from the natural history teacher Büttner.  Several items from the South Seas were listed in a museum catalogue (Catalog. Musei Academici) dating from October 1778, and in 1782 three Cook-voyage collections were purchased from the London dealer and collector George Humphrey.  The collections were a result of Blumenbach petitioning the councillors of Hanover to ask King George III of England, (then also prince-elector of Brunswick-Luneburg (later Hanover)) to purchase 'something of the surplus of foreign natural curiosities, which in particular have been collected in large quantities on the recently completed voyages around the world on Your Majesty's command.'  Over 350 Cook-voyage objects were in the collection by the end of 1782.


The large Forster collection came to Göttingen in 1799, after the death of Joseph Reinhold Forster in 1798. (George Forster predeceased his father, dying in 1794.) The Forster collection in Göttingen has been said to 'mirror' that of the Pitt Rivers, since the Forsters collected ethnographic objects systematically and often collected more than one of each item.  They appear to have divided up their collection fairly evenly when making the donation to Oxford University in 1776.


The collections in Göttingen were used as teaching collections from the very beginning.  Blumenbach was the first to use material bought back from the South Seas as demonstration material in his lectures, giving impetus to further research efforts.  His pupils included Alexander von Humbolt, who travelled extensively in Latin America between 1799 and 1804.  Goethe praised above all the 'objects fabricated by the peoples of the South Sea Islands' during his stay in Göttingen in 1801.

Currently there are 17000 objects in total in the collection in Göttingen, the original collections having been added to over the years, with an emphasis on Africa and the Indo-Pacific.

The museum was kindly opened for us by the curator, Dr. Gundolf Kruger.  Many of the Cook-voyage objects are currently on loan to an exhibition at the Neidersachishes Landesmuseum in Hanover, the subject of the next post. 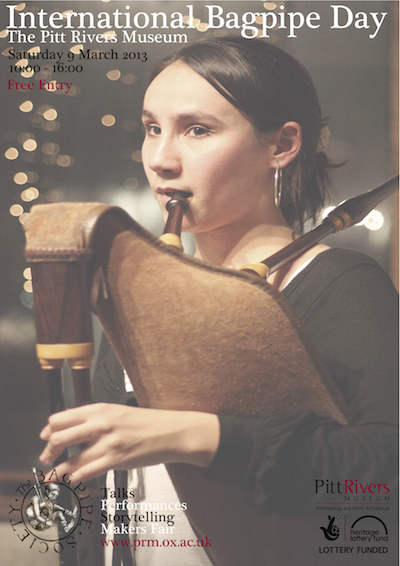 This Saturday, the 9th March, is International Bagpipe Day, which this year is being held at the Pitt Rivers Museum.

A bagpiper was on board during Cook's second voyage - a recruit who played bagpipes and one who played the violin were requested by the Admiralty Secretary in a letter to a Colonel Bell in Plymouth, asking that they be held in readiness to embark on one of the ships fitted out for making discoveries.

George Forster mentions this bagpiper in 'A Voyage Round the World', in an entry for August 1773, when the expedition had reached Tahiti.  He writes that 'a highlander, who was one of our marines, was ordered to play the bagpipe, and its uncouth music, though almost insufferable to our ears, delighted the king (Aheatua, said by Forster to be the king of O-Taheitee-eetee-Little Tahiti) and his subjects to a degree which we could hardly have imagined possible.'

A few days later, in Matavai Bay, 'our Highlander performed on the bag-pipe to the infinite satisfaction of all the Tahitians, who listened to him with a mixture of admiration and delight.  King O-Too (the king of O-Taheitee-Nue, Greater Tahiti) in particular was so well pleased with his musical abilities, which I have already observed were mean enough, that he ordered him a large piece of the coarser cloth as a reward for his trouble.'
Posted by Jeremy Uden at 16:44

Sometimes, objects can surprise us.  The barkcloth mentioned in the last post, 1886.21.19, was collected in Tahiti by Joseph Banks and donated by him to Christ Church, his old Oxford College.  Our museum database suggested that it was nearly 4 metres long, and just over a metre wide.
Once the barkcloth had been brought to the Conservation Lab for treatment, it was soon obvious that these were the folded measurements.  The piece of barkcloth actually measures 3.35m wide by 3.85m long.


In our small conservation lab objects this size can pose a problem.  It was impossible to open the barkcloth out fully, and the processes of surface cleaning and reinforcement of tears had to be carried out by keeping the barkcloth rolled at each end, like a scroll, and working on the small unrolled section.  We had to decide how to store the barkcloth, and came to the conclusion that our stores could only accomodate it if it were folded in half and then rolled.  Folding it needed the largest tables in the museum, found in our Researchers area, and it was amazing to see such a large sheet of fine, almost translucent barkcloth and to think about how it would have been made, probably by groups of women working together.  The barkcloth is so finely beaten, however, that there is no evidence of any joins.


The barkcloth has been rolled for storage around a custom made support sewn from calico and filled with polyester wadding.
Posted by Jeremy Uden at 15:42


All text and images on this blog are copyright of the Pitt Rivers Museum, University of Oxford

The postings on this site are my own and don't necessarily reflect the Pitt Rivers' position, policies or opinions